Part I: The Real Sharia

Sharia Laws of the Holy Qur’ȃn

Allah inivites us to the abode of peace

Sharia Laws of the Holy Qur’ȃn

If you go through the pages of the Holy Book, you will find Divine Commands scattered throughout. The Holy Qur’ân distinguishes Commands and obligations related to Faith (îmȃn) and worship, called Haqûq Allah (حقوق ﷲ), and obligations toward society, the so-called Haqûq al-‘Ibȃd (حقوق العباد). Prayer (صلاة; 4:103; 58:13), fasting (صوم; 2:183), pilgrimage (2:196; (حج, ritual washing before prayer (5:6), funeral Prayer (9:113), and other obligations (9:112) fall under the category of Haqûq Allah. There are some Commands in which only the believers are addressed. For example, you read:

وَعَلَى اللَّهِ فَلْيَتَوَكَّلِ الْمُؤْمِنُونَ, “in Allâh (alone) should the believers put their trust” (14:11);
يَا أَيُّهَا الَّذِينَ آمَنُوا اذْكُرُوا اللَّهَ ذِكْرًا كَثِيرًا,“Believers! Remember Allâh with much remembrance!” (33:41);
يَا أَيُّهَا الَّذِينَ آمَنُوا اسْتَعِينُوا بِالصَّبْرِ وَالصَّلَاةِ ۚ, “O you who believe! Seek (God’s) help with perfect patience . . .” (2:153);
وَاتَّخِذُوا مِن مَّقَامِ إِبْرَاهِيمَ مُصَلًّى, “Take to yourselves the place of Abraham (- the Ka‘bah) for a centre (and face towards it) during Prayer” (2:125);
فَلْيَسْتَجِيبُوا لِي وَلْيُؤْمِنُوا بِي, “they should respond to My call, and believe in Me” (2:186).
These are examples of our obligations toward our Creator and Sustainer. There are some Commands for all people, irrespective of their belief. For example:
يَا أَيُّهَا النَّاسُ اعْبُدُوا رَبَّكُمُ الَّذِي خَلَقَكُمْ, “O People! Worship your Lord Who has created you . . .” (2:21);
سَبِّحِ اسْمَ رَبِّكَ الْأَعْلَى الَّذِي خَلَقَ فَسَوَّىٰ وَالَّذِي قَدَّرَ فَهَدَىٰ, “Extol the holiness of the name of your Lord, the Most High. Who creates (all things) and gives (them) suitable and perfect shapes. Who determines (the capacities and faculties) and furnishes them with (appropriate) guidance to achieve their final goal” (87:1–3);
فَسُبْحَانَ اللَّهِ حِينَ تُمْسُونَ وَحِينَ تُصْبِحُونَ, “So glorify Allâh when you enter the evening and when you enter the morning” (30:17).

Ignoring or disregarding any of these obligations and Commands are not punishable by human hands, and no physical punishment is mentioned anywhere in the Holy Qur’ân. Their punishment is left at the discretion of the Almighty.

وَالَّذِينَ كَسَبُوا السَّيِّئَاتِ جَزَاءُ سَيِّئَةٍ بِمِثْلِهَا, “And (as for) those who committed evil deeds, they shall be punished in measure with the evil done . . .” (10:27);
وَلَكُمْ فِي الْقِصَاصِ حَيَاةٌ يَا أُولِي الْأَلْبَابِ لَعَلَّكُمْ تَتَّقُونَ, “O people of pure and clear wisdom! Your very life lies in (the law of) equitable retaliation, (you have been commanded) so that you may enjoy security [acquire piety]” (2:179).
The emphasis is on “equitable retaliation.”

The verses show that the goal of punishment is not revenge but the protection of the innocent and peace in the society. The Qur’ânic teachings establish the pattern its believers should follow to worship the rightful Deity.

لَا إِكْرَاهَ فِي الدِّينِ ۖ قَد تَّبَيَّنَ الرُّشْدُ مِنَ الْغَيِّ
“There is no compulsion of any sort in religion (as) the right way does stand obviously distinguished from the way of error.” (2:256)

This verse is a Divine Command, which should be understood and followed. Al-Dîn (الدِّينِ) is religious law or faith (cf. 3:19). Ikrâh (إِكْرَاهَ) is derived from kariha, كره, meaning “to be unwilling, to feel aversion, to be disagreeable, or to be against one’s will.” Ikrâh (إِكْرَاهَ) is “to compel a person to a thing against his or her will”; ikrâhun is compulsion. “There is no compulsion of any sort in religion,”لَا إِكْرَاهَ فِي الدِّينِ , is a clear statement. The compulsion of “religion” refers to the enforcement of its laws. It also includes forced application of Sharia laws, and conversion to Islam. Such compulsion is against the very command of this verse and Qur’ânic teachings in general.
These Divine teaching stand apart from formal rulings issued by Islamic jurists called fatwȃ. The label of fatwȃ is often loosely applied by the scholars (‘ulemȃ’) and the muftis to their opinions on a particular issue—what is forbidden (harâm), allowed (halâl), obligatory (faradh), or discouraged (makrûh). The fatȃwȃ (plural of fatwȃ) cannot be part of Sharia if they are not mentioned or endorsed in the Holy Qur’ân. Conversely, if they are mentioned in the Qur’ân, the Book of God, then there is no need of giving a fatwȃ on that particular subject. On issues that are not mentioned in the Qur’ân, fatȃwȃ can provide some degree of guidance if there is a social need, but they cannot be raised to the level of Divine Law.

There is a long list of laws and rules that claim to be Sharia (شريعة) .Some of these laws are said to originate from the “consensus” of the community (ijmâ‘,إجماع ); however, consensus or even unanimous agreement of the Muslim community cannot elevate a law to the status of Divine Law or Sharia Law. Originally, ijmâ‘ (إجماع) was the consensus among the Companions of the Holy Prophet (pbuh), not a consensus among the “Learned” (‘ulemâ’,علِماء ) of the later generations (Ibn Hazm). Even unanimous agreement of the community, determined by the votes of its muftis, does not have the authority of Sharia. The ijmâ‘ of later periods can offer only an opinion on a special situation, a situation that was absent at the time of the Holy Prophet (pbuh). Moreover, ijmâ‘ was not practiced among the Companions of the Holy Prophet (pbuh), except on a limited number of subjects and occasions. Ijmâ‘ rulings of ‘ulemâ’ and muftis when not endorsed by a Qur’ânic verse should not be labeled “Sharia Laws.” We have already received a warning from God in this regard:

“And do not say because of the lies which your tongues utter, ‘This is lawful and that is unlawful,’ lest you should forge a lie against Allâh.” (16:116)

The Sharia Laws must be derived from the Qur’ân, however many so-called Sharia are based on fatwȃs—the rulings of Islamic scholars and a misinterpretation and misrepresentation of traditions (Ahadith). Paradoxically, today’s Islamic scholars who propagate the draconian Sharia and who give equal weight or even precedence to the traditions (Ahadith) over the Qur’ȃn, accept and recognize past scholars as well as the Companions of the Prophet (pbuh), who did not subscribe to these loose interpretation of Sharia.

There are four predominant Sunnî doctrines: the Hanbalî school, the Mâlikî school, the Shȃfi‘î school, and the Hanafî school. In addition, there is the Shî‘a Ja‘afarî doctrine. These five doctrines differ in their interpretation of the Ahadith (traditions) from which they derive their law. Problems with the “Sharia Law” arise when so-called scholars fail to distinguish between the two types of Islamic duties that were described earlier. On the one hand are the obligations toward Allah—Haqûq Allah (حقوق ﷲ)—which when not followed are not punishable by worldly laws. On the other hand are breaches of the social laws—Haqûq al-‘Ibȃd (حقوق العباد)—which can be punishable according to state legislation. Qur’ânic teachings on social laws (Haqûq al-‘Ibȃd, حقوق العباد) emphasize ethics and morality rather than punishment at the hands of its followers. The teachings urge protection of the underprivileged and the weak—the poor, orphans, and women (e.g., 2:177)—and demand humility and respect toward others. The features of Haqûq al-‘Ibȃd are at times general, requiring interpretations, commentary, reflection, analogy and careful thought, always keeping in mind the basic requirement of Mercy. Occasionally these concepts are precise, requiring no further interpretation.

Peace Through Understanding News and Events

Welcome to WordPress. This is your first post. Edit or delete it, then start writing! 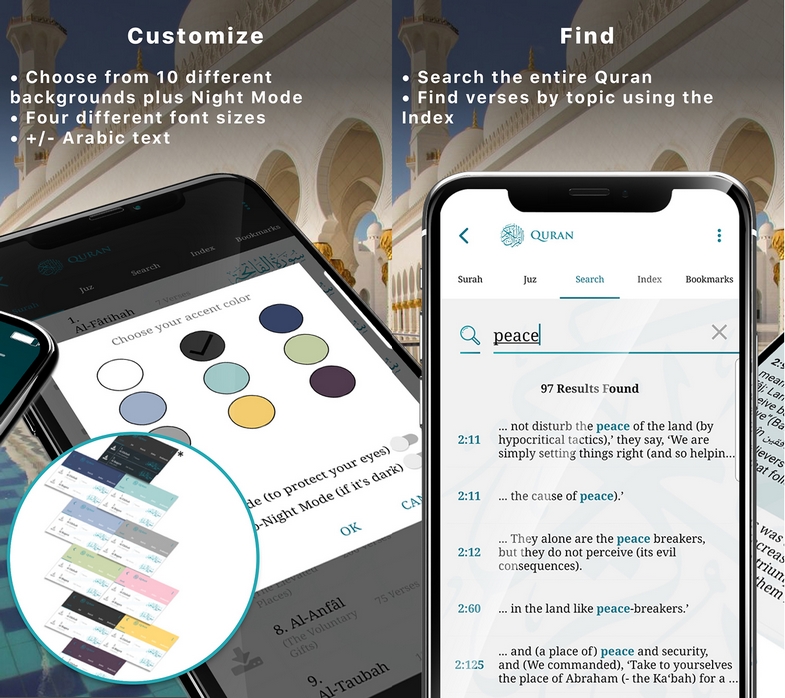 Drop Us a Line

Let us know if you have any questions!

Dialogue is an essential part of any script